Here are some pentatonic patters. There are 5 patterns all made for three string sweeping à la Yngwie Malmsteen.
The intention was to create some sweepable patterns that are based on the pentatonic scale.
All the shapes incorperate some wide finger stretching. Reason for this is that the pentatonic only contains five notes and I wanted to avoid double notes in the patterns.
The key for all the patterns is A minor.
Audio Examples will follow soon 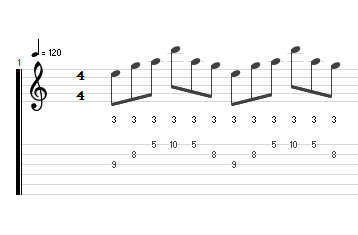 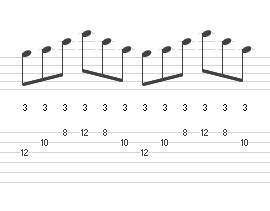 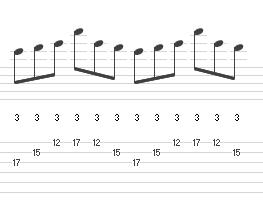 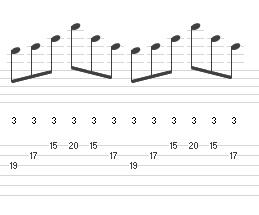 The first two patterns are ascending. While I was trying to write these patterns out I noticed that for some reason they sound great played together. So I recorded them with two tracks:  Pattern 1 and 2.mp3

I always liked the sound of country/bluegrass guitar solos. Players like Albert Lee, Brent Manson, Danny Gatton and others impressed me with their style, melodies and chops.
Even though I was never that much of a country player, I wanted to find a way to improvise over country chord changes or at least survive a couple of them.

While I studied at Musicians Institute (Guitar Institute of Technology), I took lessons from Joe Elliot. The lesson was about Jazz improvisation. He had an interesting approach to connect different scales and arpeggios over chord changes:

1. Play only chord tones that belong to the chord over which you are playing.
2. Play uninterrupted eighth notes (no breaks, no other rhythms, no cheating).
3. When changing to the next chord, play the nearest chord tone of the new chord
From: Introduction to Jazz Guitar Soloing by Joe Elliott page 15, ISBN 978-0-634-00970-9 Hal Leonard

Finally I ended up adapting the idea of the connecting game and took it for the country chord progressions.
It took me some research to figure out what basic scales would bring that country sound. In most articles they talk about mixing arpeggios, scales and some additional notes.

My Ears though told me to use a different major blues scale for each key.
A mandolin beginners book confirmed my assumption.


Example
Let's say we are in the key of A major. The chord progression is A major, D major, E major and back to A major In our example I would play the A major Blues scale over the A major chord, changing to the D major Blues scale and then to the E major Blues scale.
Here is an example which includes all three scales/keys with the usage of the connecting game. For practicing purpose it's all steady eight notes. I start with the A note and move upwards the scale, when the key changes I take the closest note (higher or lower) of the next key.

That's it. I hope this approach helps you to manage your country chops.